Points of Access: Achy Obejas’s “The Tower of the Antilles”

By Sarah Hoenicke for the LA Review of Books 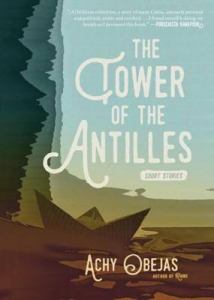 “THE MALDIVES,” a story included in Achy Obejas’s most recent collection, The Tower of the Antilles (Akashic Books), is about a woman leaving her cramped, limited home in Cuba for the United States. She’s lesbian, and in the process of being “saved” from her country by a father who is determined to convert her to Christianity, and whom she never gets to see. Of course, she doesn’t get saved in the way she thought she would, either. The story’s pragmatic voice and its themes of dislocation and everyday hardship are all typical of Obejas’s body of work. A journalist, and the author of three novels, a poetry chapbook, and numerous works of translation, Antilles is her second story collection. Her writing consistently asks how much access we have to each other and to ourselves. It questions the limits put on place and belonging for those who don’t fit one or many of the cultural stipulations about correct behavior, level of ability, sexual orientation and expression, gender, or religion. Foremost, however, Obejas understands that language is access.

The Tower of the Antilles houses 10 stories. The first and last tell a kind of fragmented origin narrative, bookending the more personal tales, and they begin with the same first line: “What is your name?” They are delivered in numbered sections; the first has seven, the last has six. The seven parts of the first evoke the Biblical creation narrative’s seven days. Called “The Collector,” it seems to alternate between two distinct time-periods — one primitive, one modern. The pieces come together, however, to show that this difference is of language, not of time. The islanders “had no calendar, no writing system, and kept track of days by counting on their fingers and toes.” When “visitors” first came to the island, the natives asked “through grunts and signs” how the new people had arrived. “We sailed on these big boats, said the visitors.” But the islanders saw no boats — theirs were small, made from maca trees. These visitors came on “caravels, each sporting three lateen sails angled against the wind.” After this encounter, the unnamed protagonist begins collecting all manner of sailing craft, renting spaces to keep them. In the end though, he undoes “each and every vessel,” and inventories the parts, “folding the fabrics left to right” like flags. Rather than a creation to begin with, we are given a discovery followed by a dissembling, as if to set us up for the clash that happens internally for people of colonized lands. Without the pre-packaged, acceptable identity of the mainstream, characters in Obejas’s fiction frequently encounter small identity crises.

Obejas writes with gentleness, without flashy wording or gimmicks, about people trying to figure out where they belong. For example, in a story from her 1994 collection We Came All the Way from Cuba So You Could Dress Like This?, the protagonist’s friend is “too indio to be Mexican, and too Spanish to be Indian.” Her stories center around ill people, men who can’t face their attraction to other men, and a pair of women who sex-play with guacamole and put it back in the refrigerator afterward, only to have their male roommate eat it (unaware of its recent use). None of her characters is perfect; most of them are a little mean. In Antilles though, it’s impossible to miss the tenderness with which these flawed creations are handled. She’s both keenly aware of all the ways that people behave badly and of the complex emotional states from which those behaviors stem.