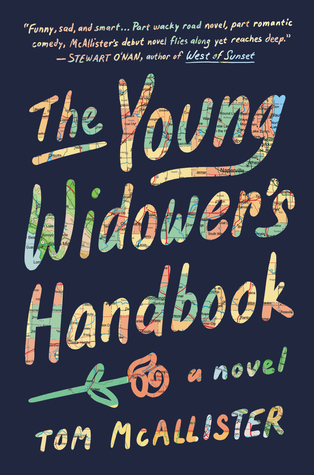 In his pleasantly hyperbolic fiction debut, The Young Widower’s Handbook, Tom McAllister engages his readers in the life of Hunter Cady and the memory of his wife, Kait, who dies early in the story. Almost everything we learn about Kait comes through Hunter – his recollections of their conversations, travel dreams, and personality differences. Kait’s death launches Hunter into a period of self-reckoning—he travels haphazardly around the U.S., talking himself through his grief, and ignoring his life, which is falling apart.

Though college graduates, Hunter and Kait meet while both still living with their parents. They fall in love, get married, buy a house. They fantasise about where they’ll travel, but then stay at home and watch travel documentaries, they tell themselves, for research, and don’t go anywhere. Kait’s death makes Hunter realise how little he’s done with his life – he does unfulfilling work at a rental car agency. Kait’s ashes along for the ride, he sets out to see something of the States, thinking that it makes the most sense to start with his own country, and later to go farther afield.

Hunter’s trip is a long series of mishaps. He’s constantly thwarting himself—a habit that preceded Kait. Once, to avoid learning the skills of his outdoorsman father, he intentionally cut his hand as he was cleaning a fish so that he could return to the tent, where he had a video game hidden. He’s a dreamer whose only full deed was to fall in love with his wife. Rather than the handbook the title suggests, this is a prolonged warning label detailing how not to be human in love, a fate none of us can escape.